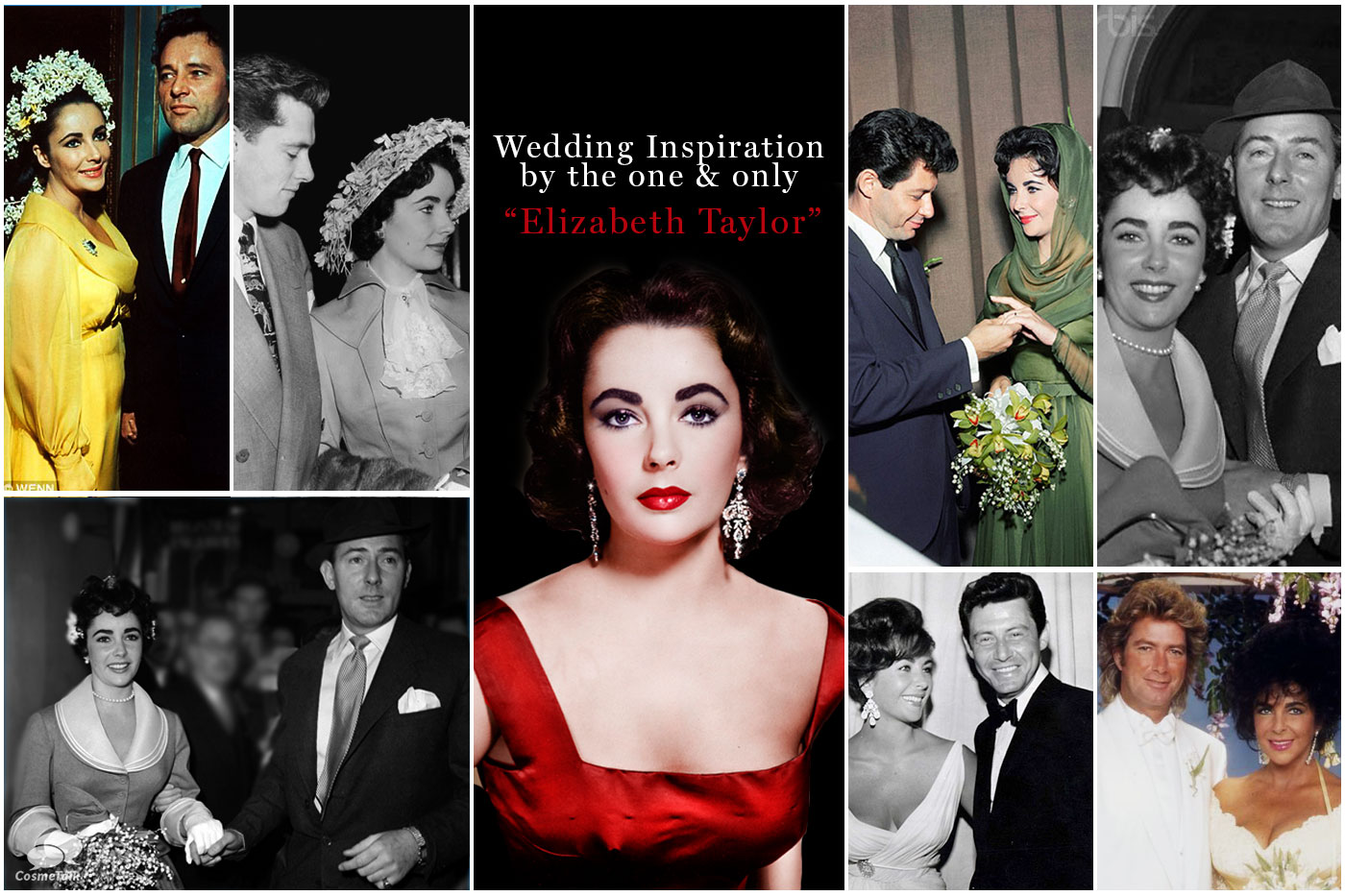 Wedding inspiration by the one and only – Elizabeth Taylor

Iam going to go out on a limb and state that there is no Bride more inspiring than Elizabeth Taylor. The hollywood beauty was married 8 times to 7 different men and she never gave up on love.  Elizabeth Taylor was a woman of abundance. She was endowed with outsized beauty, outsized fame and outsized appetites.

“I feel very adventurous,” she was once quoted as saying. “There are so many doors to be opened, and I’m not afraid to look behind them.”

Elizabeth Taylor was the first tabloid star, with fans and haters alike all interested in her love life perhaps more than her films. Of his relationship with the actress, Wilding later said,

“The real tragedy concerning Liz is that there is not a man in the world she cannot have at the snap of her fingers.”

Through alternative to classic bridal wear and varied themes, from 1950-1991 she powered through as a wedding saint, where all women from all different parts of western culture were cutting pictures out of their magazines hoping to achieve the glow of Elizabeth Taylor for their special day.

Here’s a look back at her many marriages: 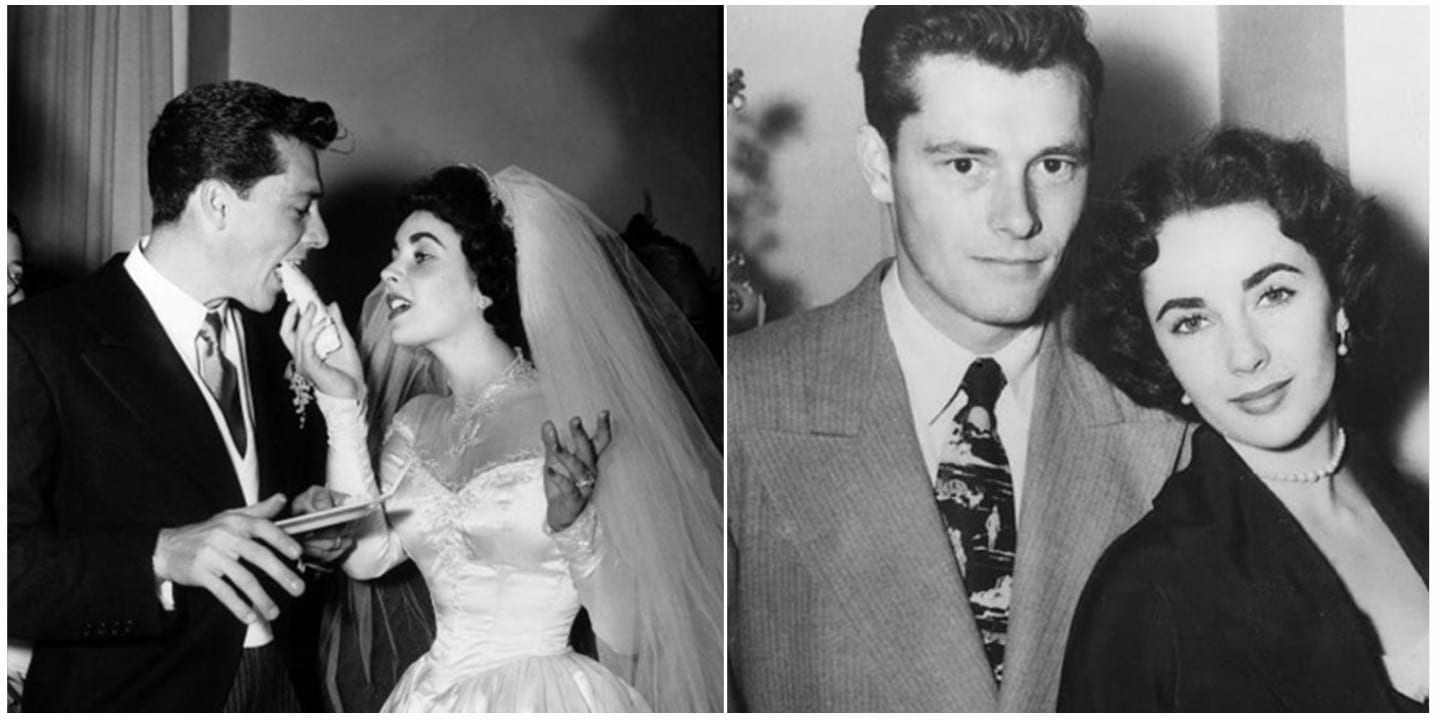 For her first trip down the aisle, Taylor said “I do” to Conrad “Nicky” Hilton (yes, he was great-uncle to Paris and Nicky Hilton). Taylor was 18 when she married the American socialite and heir to the Hilton Hotel chain. A then 18-year old Taylor chose a very 1950’s Helen Rose designed gown to say her vows in front of 700 of their nearest and dearest. After a three-month honeymoon in Europe and five months at home, the couple divorced.

Three months after the end of her first marriage, Taylor tied the knot with British actor, Michael Wilding. Wilding was 20 years her senior so naturally she chose a more demure, serious look in a modest flared suit with a white collar. This wedding look was also designed by Helen Rose.  She had two sons with him, Michael Howard and Christopher Edward. Though their marriage produced two sons, Elizabeth filed for legal separation before even telling British actor Michael Wilding that she was leaving him. What had happened between them? She met Mike Todd (husband #3). They divorced in 1957.

Almost immediately after divorcing Wilding, Liz wed Academy Award winning Hollywood film producer Michael Todd. She often referred to him as one of the great loves of her life (alongside her jewelry and Richard Burton). The couple was married in Acapulco, Mexico, where Taylor wore a very dramatic hooded silk organza gown, with her 29 carat diamond engagement ring. This was sadly her only marriage to not end in divorce, Todd died in a private jet crash in 1958. 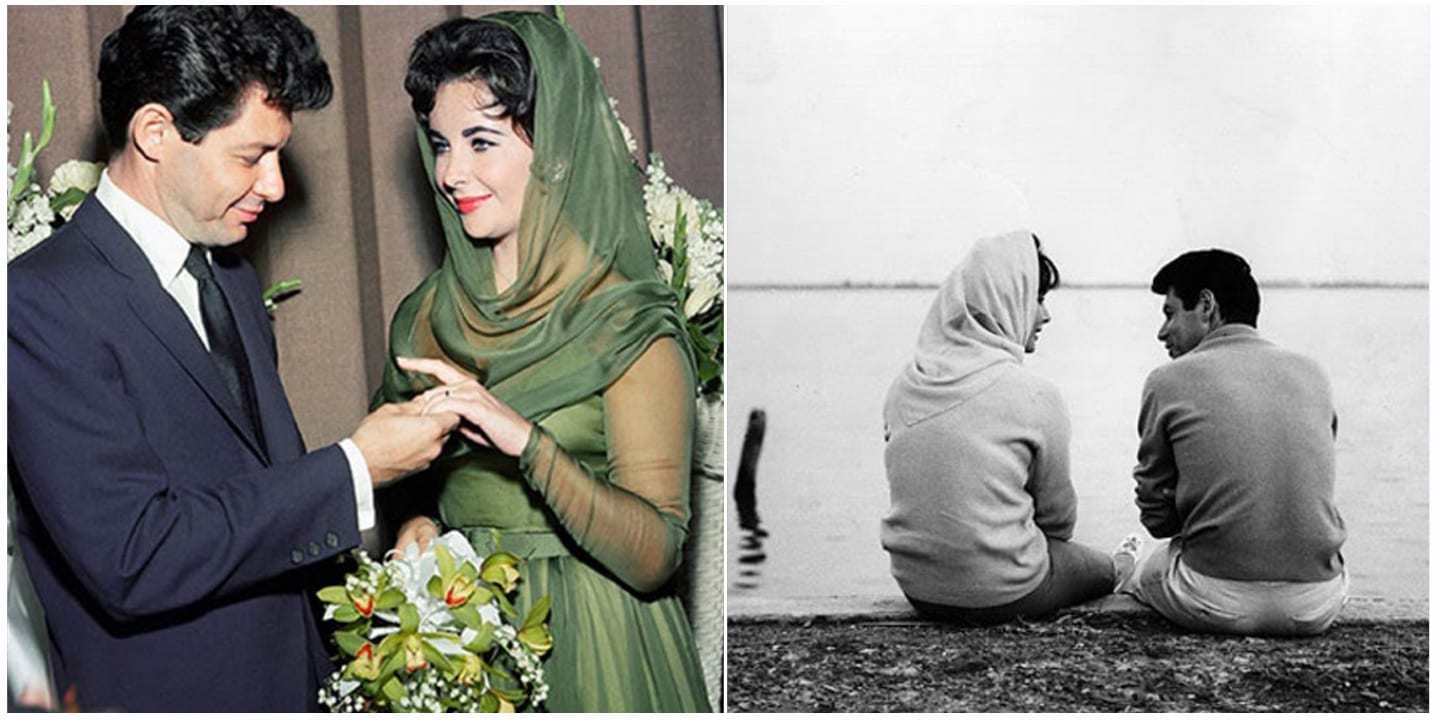 Next up, Michael Todd’s best friend (and husband to Debbie Reynolds — Liz’s maid of honor at her wedding to Todd) Eddie Fisher. Yes, he was also dad to Star wars Princess Leia herself, Carrie Fisher. The two began a love affair after Todd’s death, and you guessed it, that led to marriage number 4 for Liz — and a 40-carat engagement bracelet. The couple married in a synagogue in Las Vegas. Looks like after Acapulco Liz had a penchant for wedding day hoods and colored dresses. This time choosing a green silk dress complete with a hood and long sleeves. Eddie followed her to Europe for the filming of Cleopatra, during which she began a romantic relationship with costar Richard Burton, a fact that was obvious to everyone, including Eddie, who finally left her.

Oh “Liz and Dick.” The drama-inducing duo met on the set of Cleopatra and began a scandalous affair. At the time they were both married — Taylor to Fisher and Burton to Sybil Williams — but both were able to end their respective unions. They would wed (for the first time) in Montreal in 1964. Cleopatra costume designer, Irene Sharaff, crafted Taylor’s now iconic canary yellow babydoll dress. She completed the look with hyacinths and lilies of the valley weaved into a dramatic braided updo and topped off the dress with a diamond and emerald Bulgari brooch. “The only word Elizabeth knows in Italian is Bulgari,” Burton once said of Taylor. 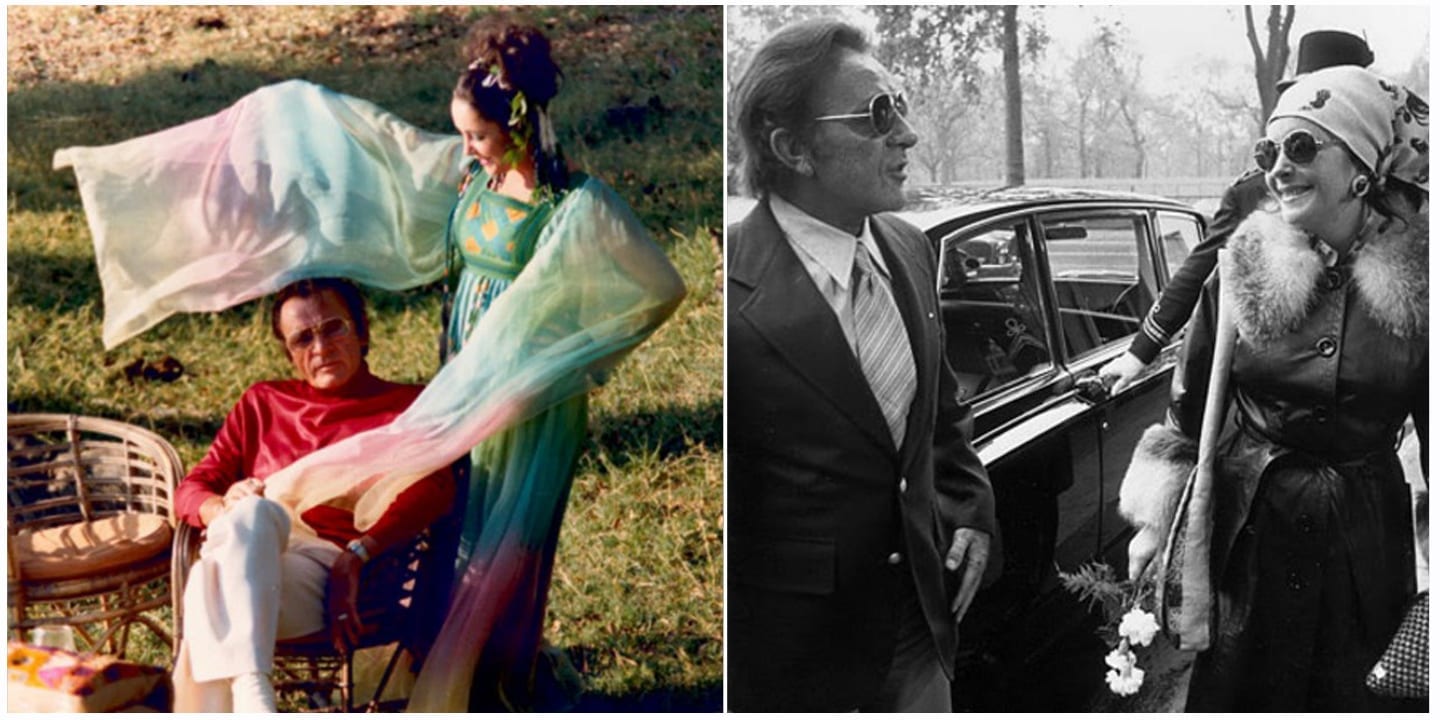 After 10 dramatic years together, “Liz and Dick” divorced in 1974. Not content to only pledge their eternal love once, the couple re-married 16 months later in Botswana. This time Liz went full on 1970’s free spirit in a tie-dye Gina Fratini-designed dress in all colors of the rainbow, embroidered with tiny feathers. It was during this marriage that Burton bought his wife what came to be known as the “Burton-Taylor” Diamond, a 69.42-carat pear-shaped stone. Many years later, it was sold to benefit a hospital in Botswana.

The doomed lovers would divorce for the second time in 1976. 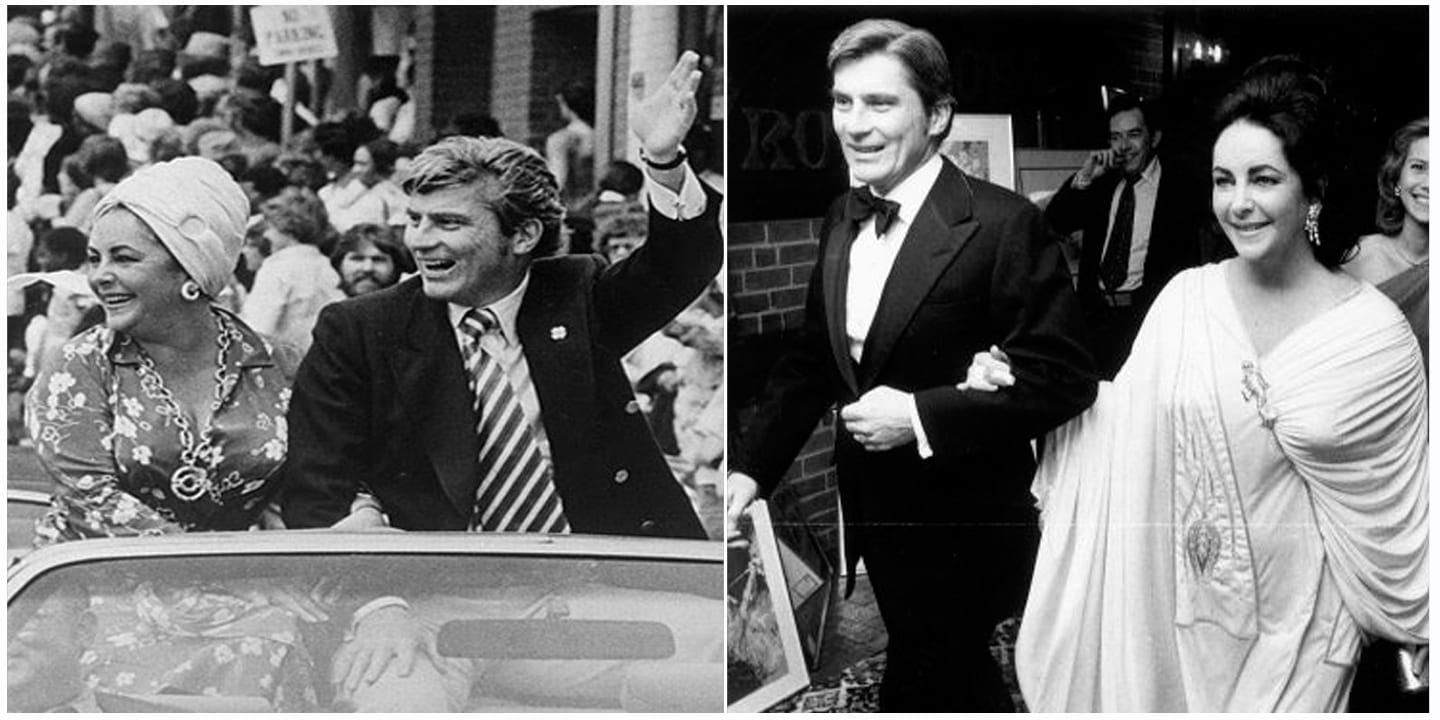 True to her own history, Taylor did not remain single long after ending the longest relationship of her life. Four months divorcing Burton, Taylor’s seventh and most quiet wedding, found her hitched to Senator John Warner. The couple said their “I do”s in an intimate winter wedding ceremony on his farm in Virginia. She wore a violet cashmere dress topped with a tweed and fur coat, and matching turban. Playing politician’s wife didn’t sit well with Liz and she would divorce for a seventh time in 1982.

After being single for nearly a decade—the longest she’d ever allowed herself to be unmarried since her first marriage nearly half-a-century earlier, Elizabeth shocked the world when she decided to marry a mullet-sporting construction worker 20 years her junior at Michael Jackson’s Neverland Ranch.

You know what they say, eighth time’s the charm (nobody says that). For her last, and most over the top, turn as bride, Dame Liz Taylor would wed Larry Fortensky, whom she met at the Betty Ford Center, at the age of 59. Taylor wore a pale yellow lace Valentino gown (and very deep tan) to marry her last hubby in front of 160-guests including Liza Minnelli, Eddie Murphy, Nancy Reagan, Diane von Furstenberg, Arsenio Hall, George Hamilton, Merv Griffin, Quincy Jones, Macaulay Culkin, and Brooke Shields. This would not end well for Liz, the couple divorced five years later.

I work as a cosmetic nurse with a renowned aesthetic practitioner. Apart from my job, I love blogging about the latest news and treatments from the aesthetic medicine industry. My articles are also published in various online magazines and newspapers. I thoroughly enjoy my experience with aesthetic medicine and I also love to share it with my readers. I live in London with my two adorable kids.

Let your lip colour do the talking