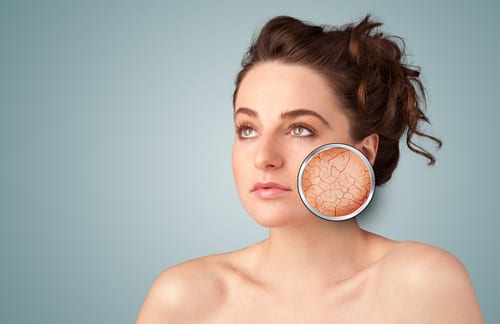 Skin is the largest and the outermost organ of your body. While it has protective function among many others, it makes it exposed to various harmful agents as well. This is why skin is vulnerable to various kind of damages. Not only can the external environment, the internal environment of your body also damages your skin in various ways. One of such damage is FREE RADICAL DAMAGE! It can occur both externally and internally.

What Are Free Radicals?

Free radicals are highly reactive atoms or molecules that have an unpaired electron in their outermost shell. They are always looking for some atom or molecule to react with. This way they pair their electron up and are stabilised. Examples of free radicals are reactive oxygen singlet, superoxide radical, and hydroxyl radical etc. Most commonly involved free radicals in skin damage are reactive oxygen species, commonly known as ROS. As they are the most common cause, we will mainly focus on them.Superoxide, hydrogen peroxide, and hydroxyl radical are the most common examples.

What Are Different Kinds Of Reactive Oxygen Species (ROS)?

These are produced inside the skin and body. They are mainly produced by the mitochondria, endoplasmic reticulum and by peroxisomes of the cells. This process can lead to mitochondrial damage which in turn initiates cell death (apoptosis).

ROS in this group follow external factors such as smoking, tobacco use, illegal and legal use of medications as well as exposure to radiation and other environmental pollutants.  The type of pollutant may determine the degree of damage on the cells by ROS.

How Do We Determine How Damaging Can One Free Radical Be?

The rate of reactivity does not necessarily determine the degree of ROS damage. For example, while the hydroxyl radicals are highly reactive, they are not as damaging as hydrogen peroxide which is less reactive. This is because its lower reactivity gives it enough time to penetrate the cell and get into the nucleus where it can initiate DNA damage and related consequences such as ageing, apoptosis and increased risk of cancer. This is why highly reactive specie doesn’t mean more damage so don’t be fooled.

Free radicals are formed in response to some chemical reactions and so are reactive oxygen species (ROS). Let’s look into the process.

Oxygen is at the centre of ROS formation. The process starts by the reduction of molecular oxygen. This leaves the oxygen molecule with unpaired electrons. This forms an unstable type of oxygen called superoxide.  Superoxide can undergo reduction and oxidation at the same time (dismutation) to form hydrogen peroxide. Hydrogen peroxide can undergo a reduction process to either form an unstable hydroxyl radical or water.

What Is Oxidative Stress?

When the ROS are from the normal metabolism, the body can easily cope in keeping them in check. However, there are environmental factors that lead to excess ROS in the body that overwhelms the body’s ability to manage them. This state is referred to as oxidative stress where the rate of free radicals production is higher than the rate of their neutralization.

What Are Different Sources Of Free Radicals?

As described earlier, there are two most common causes of free radical formation:

Free Radical Formation Due To Reactions Inside Your Body

There are thousands of reactions happening in your body every moment. There are many byproducts of such reactions. Reactive oxygen species (ROS) are produced endogenously as byproducts of usual body reactions.

How Do Reactive Oxygen Species (ROS) And Other Free Radicals Cause Damage?

Your skin cells are made up of various molecular components like carbohydrates, proteins, and lipids etc. They are present in all parts of your cell, from the cell membrane to the nucleus. When reactive oxygen species (ROS) or free radicals are formed, they lead to cellular damage through the alteration of cell membranes, lipids, proteins and DNA. Damaged DNA sets the stage for mutation cell changes and an increase in the risk of malignant cell changes. This may also present with signs of ageing.

What Are Different Signs Of Ageing Produced Due To Free Radical Damage?

Following are the most common signs of ageing caused by free radical damage.

How Can You Prevent Free Radical Damage?

Well, if you think your skin is just fine and it doesn’t need any preventive measures, you are wrong. Free radicals are silent enemies of your skin that are constantly damaging your skin without letting you know. This damage only becomes visible when it is big enough. So there is always a need to take a few steps to prevent this damage. Also, if the damage has occurred you still need to adopt a skin care regime that helps repair and prevent further free radical damage.

Anti-oxidants are your holy grail when it is about preventing and repairing free radical damage. They fight such radicals and make sure that they are eliminated from your skin before they attack your skin cells. Examples of some potent and very important anti-oxidants are vitamin C, glutathione, vitamin E, and ferulic acid etc.

You need a proper skincare regime to prevent ageing caused by different sources. This regime is known as CRES principles.